Both versions of “Karkar”1 (previously “Rietpypie”) are finished. The first, “Karkar”, consists of three stanzas and the second, “Karkar Flowers”, of two. Their styles differ, but their themes are the same: delight at the fiery flower, vivid in the setting sun. Which version to include in the final collection, I am yet to decide.

The compositions took much longer than anticipated: an unprecedented five months (though writing was sporadic), interrupted by life and, most significantly, love. Now, more focused on the anthology than ever, I eagerly begin development on “Lobelia” (working title), the second of the “Wild Flower Sketches”.

The wild Thin-stalked Lobelia is endemic to the Overberg.2 It first enraptured me in 2018 on a mountain slope not far from where I would see it again, three seasons later (along with other wild flowers new to me, among them, the Karkar Flower). Bewitched by its winglike violet petals in the breeze, a poem was inevitable.

Its loveliness I shall now attempt to extol by developing the sketch I composed after the second encounter. I intend to write more frequently, so I expect it should be completed faster than its companion “Karkar” set; however, poems are not predictable, and I must humbly submit to my Muse (that gentle wind o’er the hills). 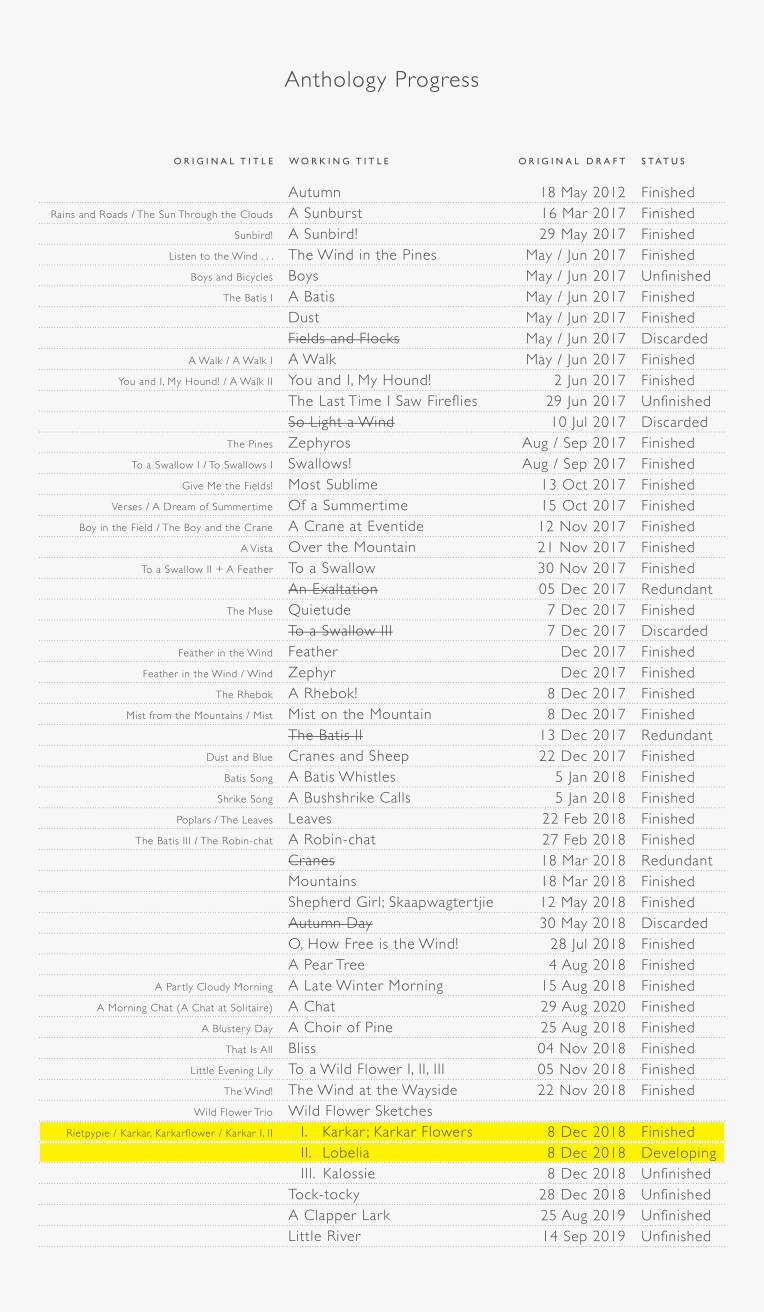 I have been working on the “Rietpypie” poem since April—the pace is glacial, but an end is in sight. In the meantime, two distinct versions of the poem have emerged from the original sketch (a continuing trend): “Karkar”1 (hitherto “Rietpypie”) and “Karkarflower” (a working title).

“Karkar” has three stanzas: one is finished; two, all but so; three yet to be resolved (that is to say, each of its variations refined and the most suitable one selected for the final composition). I am confident that August will see it completed, whereupon I shall start on “Karkarflower”. 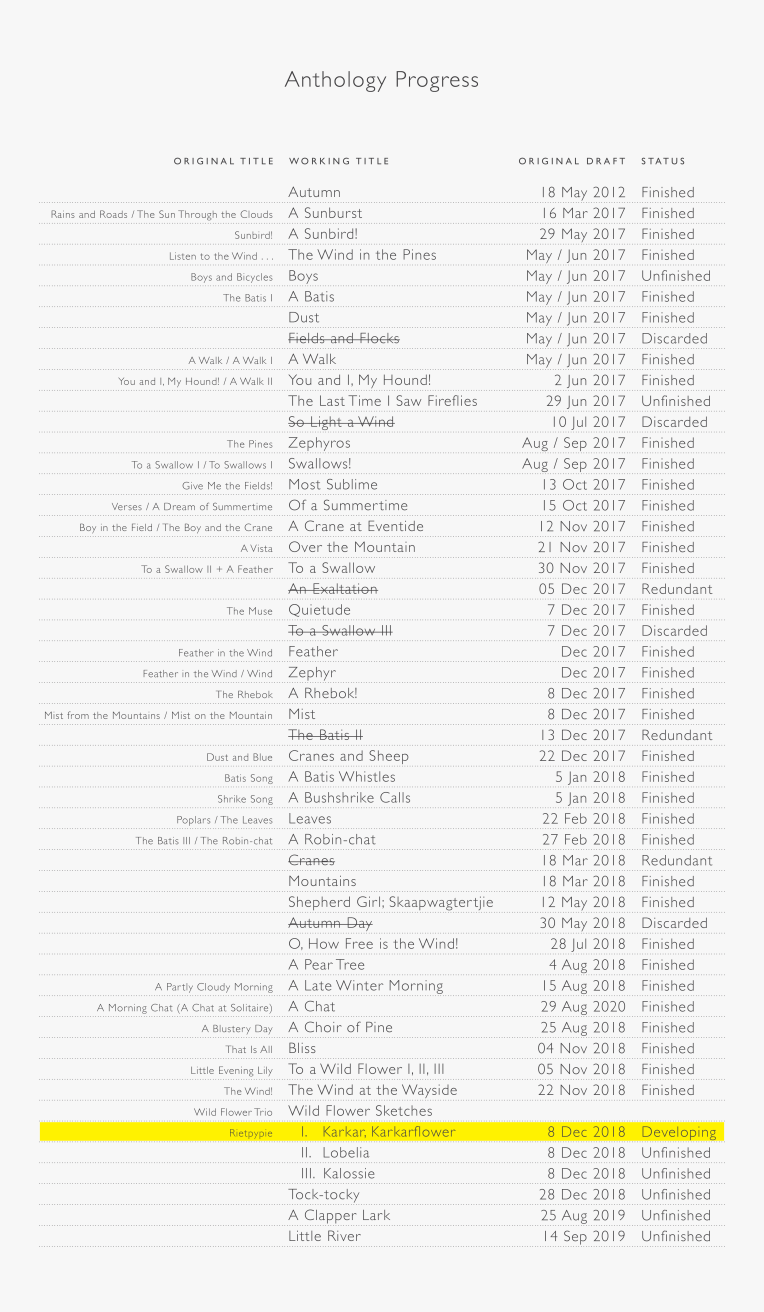 The South African autumn affords those who venture out upon the hills before sunrise the most ethereal views of the Overberg. Wet with the rains of May, puddles punctuate the paths, lanes and dirt roads—mirrors crudely shaped but polished to perfection, faithfully reflecting the sky.

Surrounded by such beauty, I work diligently at my anthology. Though presently developing “Rietpypie”, I occasionally revisit poems already completed, testing those new ideas that come with re-examination, and thus, “A Batis” returns to the writing desk as I try to improve upon it. 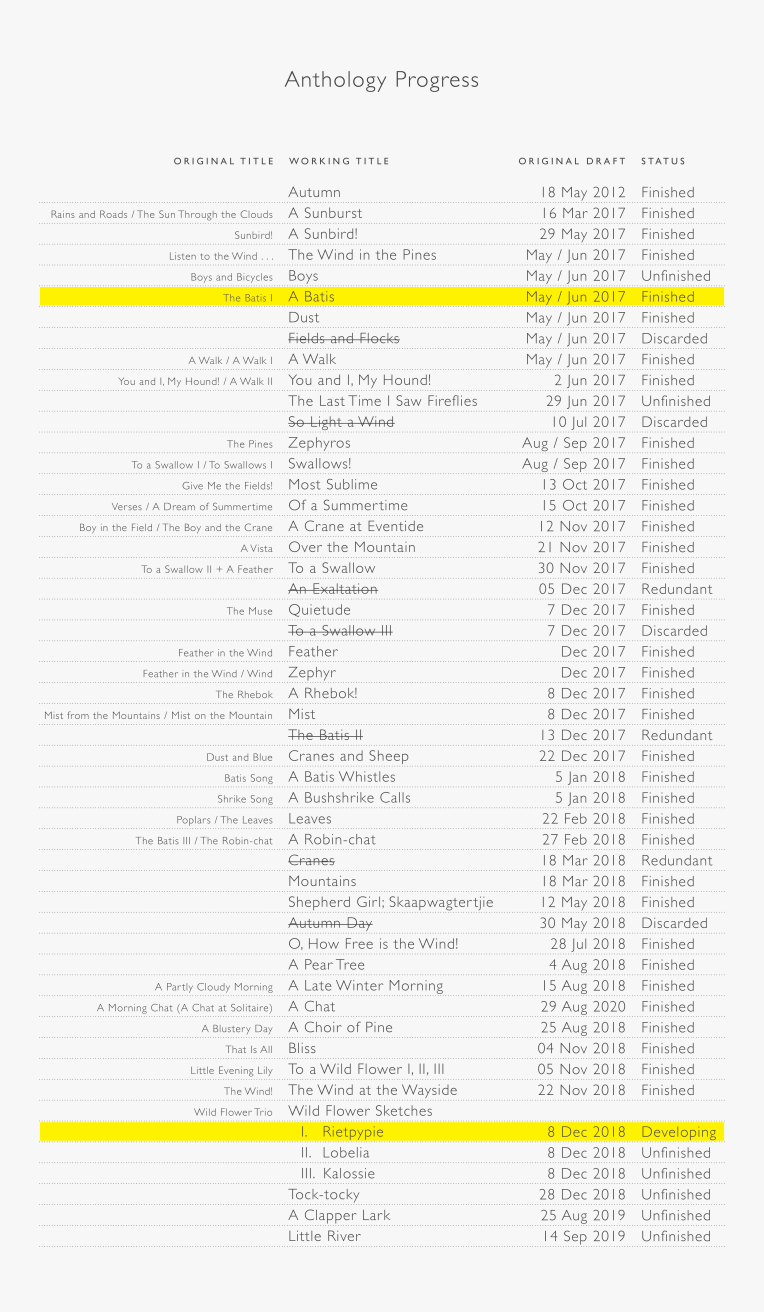